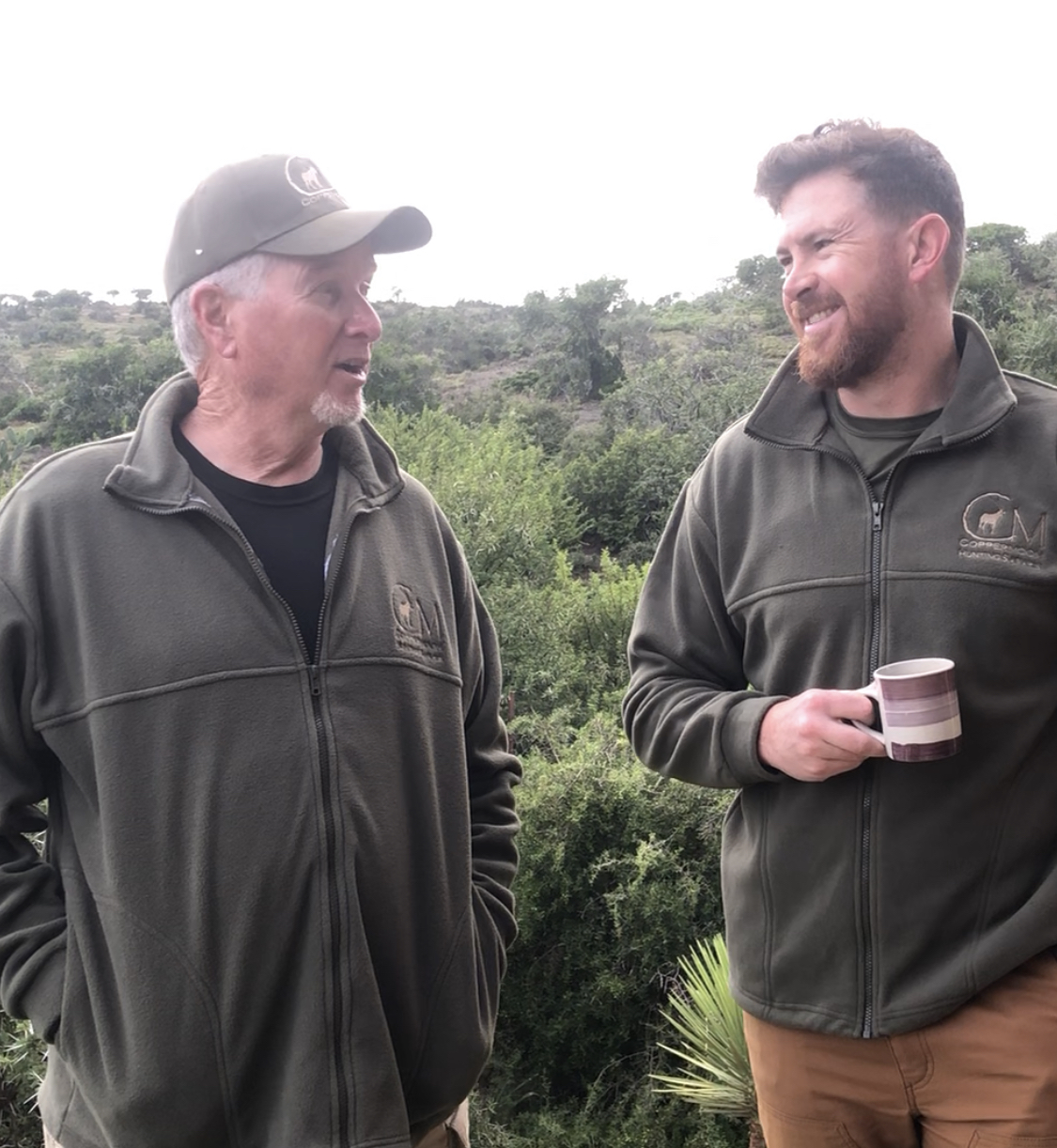 After an early breakfast, we put on our still soaked boots but with dry socks, of course, and mounted up, and what do we encounter first? Remember those Nyala bulls from the day before? Okay, not the same ones, but one every bit as huge standing under a tree as Denver said 89 yards and assured me he was trophy grade. Okay think, remember how much was that one on the ala carte menu? That means no Kudu, right? I said okay as I got out of the truck, along with the 375JDJ pistol loaded and on the Bog Pod, and he is still standing there. No wait, he’s running off, and I can’t find him in that 32mm Leupold. Crap! Failed again. I should have just got out and taken him off hand. STUPID, STUPID, STUPID! Well, at least that administrative decision-making, thick-headed process is over, and we can get back on task, STEENBUCK.

Drive around, more Steenbuck sightings but either female or not big enough. Denver played a hunch. He watched which way the Nyala bull ran off, drove to a spot in the middle of that valley, and we perched on a finger ridge and waited. WHAT ARE WE DOING HERE? WE SHOULD BE DRIVING AROUND. Then he said, here they come. I said, here what comes? He said a herd of Nyala cows, calves and bulls, including the one we just saw. Now how in the heck did he pull that rabbit out of the hat? Bog Pod set for a sitting shot, range to the anticipated area 180 yards. BUT they were moving, moving like they were on to us and not stopping. My range paper never moves. It’s always where I stapled it to the board, and now I have to find, calculate and pull off this shot--four times from 4 spots along that valley. I never had a still shot. I was bummed. So much so that I told Eric that unless it was a 100 yd still shot, basically a suicide attempt by a bull, I wanted him behind the grip. Eric and I compete in every arena, healthy stuff, making each of us better that goes back to geography and spelling bees. And even though it’s hard for me to admit even a half world away, he is better than me (maybe he will mercifully edit this part out). His hand eye coordination has always been better than me. I guess it was my late start (27 years old) into hunting. Even though he resisted, I told him it was better for the Single Shot Community to prove that a handgun like this can still deliver the goods. Better a trophy score than coming back empty.

Back to the truck, more focus on that trophy Steenbuck. More driving and as we entered the StillFontein valley, I told Denver that I liked where his mind was--one more trip to the pantry. I mean after all, this is where we saw those 4 Nyala bulls the day before, but unfortunately, they had moved and weren’t still standing there waiting or us. Circle around, drive up the valley road, Kudu cows and calves everywhere, but no bulls. Park and dismount to go up and glass the spring area. We took a slow, methodical stalk up the grade close to the crest. Denver stops, backs up two steps, turns and says 2 Kudu bulls bedded down watching us. How does this guy continue to see this stuff at close to 400 yards away? We back off the crest and slid down the backside to a point even with the bulls. Then Denver said, whose taking the shot? He had heard Eric and I talking earlier. Eric immediately said NO that it was my shot and that he knew I would make it. How is it that your kids can play the Gene Hackman Hoosier movie card saying, "after you make the second free throw" line on their Dad? I coached with lines like that for over ten years. I guess he was listening. I followed Denver's lead, approaching a small bush just over the crest. I handed him the Bog Pod already adjusted for a sitting shot, and the 375JDJ G2 pistol, loaded, scope cranked down, pistol mounted, discussed wind drift, found the Kudu still bedded down, range 221 yards, grab the Crusher Loop with two hands line it up and squeeze, THWACK!!!!!! Good hit in the shoulder, quick reload, Denver is asking for the rifle, but why? Relocate to a more direct angle. Kudu hit but standing. He was obviously hit well enough that he didn’t run, but we didn’t want him to run anywhere. Standing shot with the 375JDJ rifle, more wind drift with the 250 gr Lehigh Defense Controlled Fracturing bullet, allow for that, distance 250 yards. He had moved a little up the hill. THWACK!! Another solid hit and he was down but behind cover, but tougher than you can imagine. He could still get away. Denver dispatched trackers to each open area on either side of the spring. He told me to remain atop the crest with a tracker as he and Eric would run “off the cliff” with the pistol to apply a finishing shot if necessary. Be ready for a follow up, It was necessary from 25 yards as Eric delivered the knockout punch from close in with the 185 gr version of the Lehigh Defense bullet. Later, we found that bullet base, no petals attached (as designed) had penetrated 36” into Mr Kudu, and we saved it for the LD to analyze  back in PA. It was time for pictures, video, field dress to reduce weight, carry intact with 5 men this 300+ pound animal about 100 yards toward the truck, and yes, if you were wondering, Eric each had a hind leg as we walked it out. Again under pressure, I made the shot with an assist from Eric.

Oh crap the focus was STEENBUCK. This is gonna be tight. Loaded, trip to skinning shed, a few descriptive moments with the caretaker, lunch and it’s 2:45 pm and time for just one more drive. Totally honest here, less than 10 minutes out from a distance of 155 yards, my now super hunting wife delivered that 375JDJ 250 gr Lehigh Defense bullet right on the shoulder of Mr STEENBUCK. It’s time for adult beverages for finally the last one is in the salt!