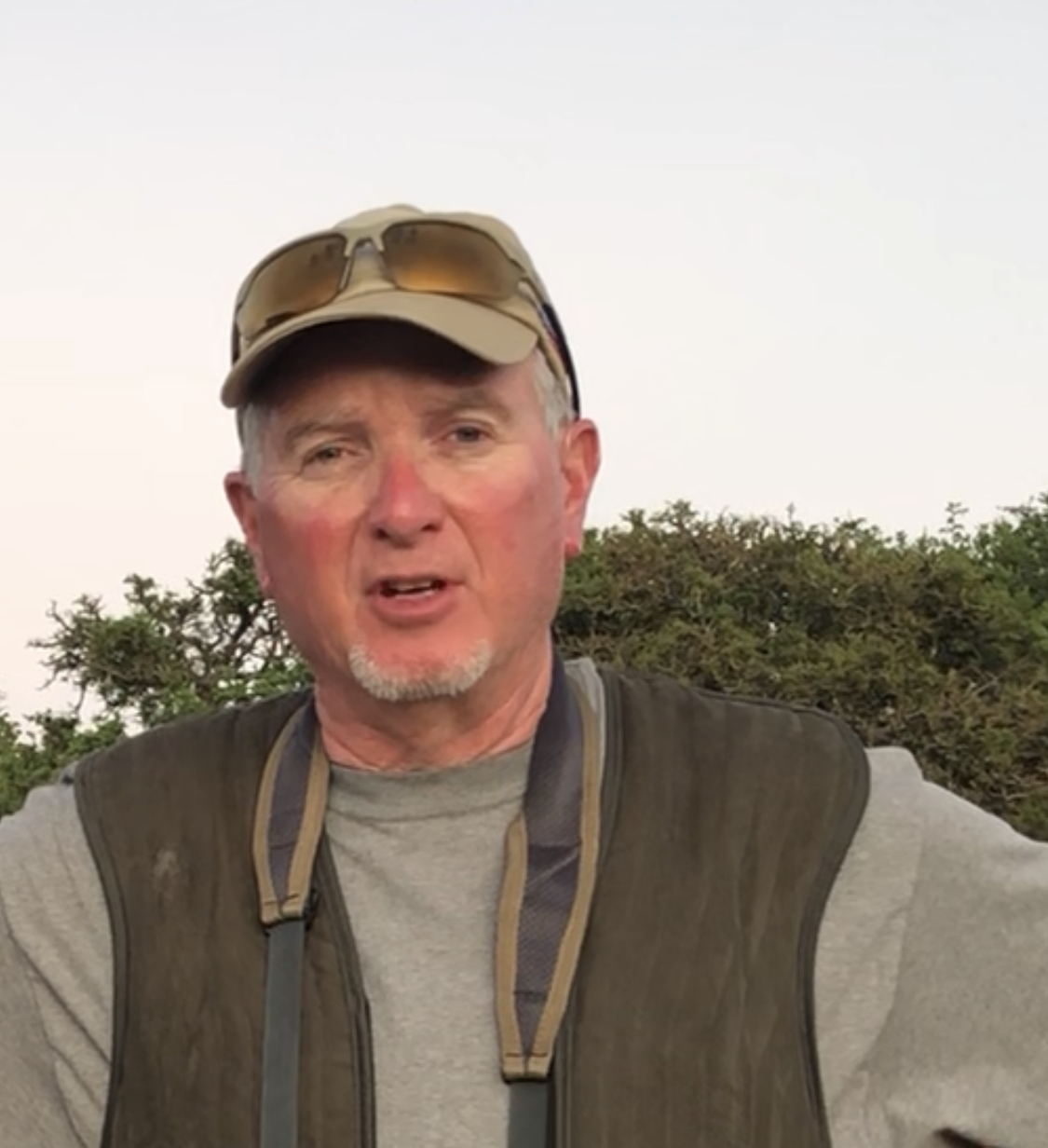 We spent the early morning session in the truck glassing and attempted a couple of stalks before returning for breakfast. Immediately after breakfast we spotted a herd of Red Hartebeest on a hillside from a distances of about 500 yards. We stalked behind the cover of the crest of the hill and closed to about 300 yards. Cows with calves were already starting to move up and over the next hill. Denver spotted a great bull standing alone about 700 yards out. I asked for the Bog Pod set up, standing, mounted the Mutt and started to dial it in. Denver asked me if I was comfortable taking a 700 yard shot. My answer was, "NO WAY! I just wanted to get a feel for what he looked like in the scope at long distance as I followed him up that hillside." I followed hi up and over and then he was gone. We retreated to the truck, and it was obvious quickly that Denver was on a mission. We glassed him from the truck, attempted to anticipate where he was headed, started a stalk quickly and efficiently only to be seconds late or he was moving too quickly, only stopping to look at us from 500 yards or more. 3 attempts failed, we could tell from his gate that he might be slowing down. He had joined another lesser bull as we cruised passed on the washboard gravel road, went over a hill and skidded to a stop. I had said to Ruth that this animal must be special the way Denver was locked in on him.

Our dismount was flawless, our stalk was planned quickly as we stalked at a fast pace on foot about 600 yards. This time we were out in front enough to set up and discuss which bull as well as shot placement. His pace had slowed to a walk, and they didn’t know we were there. We noted a slight wind left to right, but we knew with the 143 gr Hornady ELDX high ballistic coefficient it wouldn’t be affected in drift. The range was 380 yards. I moved the crosshairs slightly and let him walk into the bullets path, 1 lb 15ounce trigger squeezed, the swoosh of the suppressed shot and then the THWACK. Yes, even I can hear a bullet hit solid. He dropped from site and that baboon-sized monkey was off my back. Denver told me that the overall distance of the stalk was about 8 km!

'IN THE SALT' became the newly learned saying. Next up, Ruth’s turn. On our drive toward the skinning shed, one of the trackers spotted a nice Impala ram. An immediate stalk led to a surprising shot opportunity of only 70 yards. Unfortunately for Ruth, only his body was visible, no legs and no head as it clearly stood there in the cover, but she hesitated and the Impala ran off, crossing the road with us in hot pursuit. The 375JDJ rifle was sighted in at a 100 yard zero so when he stopped at 250 yards out it became a math equation for drop at those distances. I consulted my data card in my pocket, fed it to Ruth and she fired, just out front and low. Oh no, was it happening again? We continued to pursue, and Ruth insisted that I take the shot, now 300 yds with the MUTT. I did, and another was 'IN THE SALT.'

A great lunch put us back on the road about 2:30 pm where we immediately came across a lone Black Wildebeest bull, no herd, no ostrich and no springbuck to alarm him. Although he was clearly huge, we never stopped. We hung a right down a fence line moving 400 yards down that line and stopping under cover of some brush. Denver instructed one of the trackers to drive the truck up and over the next hill, giving our animal the illusion that we (the truck) had kept on going. Crossing a fence and a slow stalk put us at the next cross fence--perfect set up, time for the video crew, not a lot of wind, especially for the MUTT, but our friend was standing facing us. Clearly upset by the presence of the truck already over the hill. An extremely territorial animal, called the “clowns of the veldt” know for their wild antics, crazy herd movements and long white tail that flies in every direction. It was now his show time to demonstrate the dominance of the turf he was standing on. He was snorting, stomping his feet and quartering from side to side while I watched him in the crosshairs. Then he did something that even Denver had never seen before, he kicked up front to back twice like a bucking bronco at a rodeo, no distraction for me this time. It was about redemption from the day before. When he finished his tantrum, he made a mistake. He had turned just enough showing me his shoulder--326 yards, squeeze, THWACK. I got to watch him fold up as he went straight down. High fives all around, full video and the legend of the Mutt continued to grow. The Hat Trick, 3 trophies in the salt in about 6 hours of elapsed time. Crazy, but now we need to get Ruth on the board.