Thankfully, the temperatures moderated back into the 80’s and after the very long Day 3, Denver said we could start an hour later and in the afternoon we could go to the caretaker's home, use his WiFi as well as take a dip in the pool before the afternoon hunt. I had no idea that there was any pool in our plans but grateful for it. Also worth noting, the caretakers of the ranch, Rob and Libby Holdt, in there early 80’s, were delightful hosts with Ms Libby showing off her gardens to Ruth while Rob quizzed me about the infamous MUTT. It’s probably the only time in my life I will ever get to feel like Quigley showing off his Sharps rifle in Australia.

Refreshed, we headed back to StillFountein for an observation stalk. We dismounted the truck, walked 500 yards to a patch of small trees at the crest looking down at the overgrown spring area. Here we observed Warthog, Kudu, Waterbuck, Blesbuck, and Duiker from a max range of 500 yards. Then this happened--I thought we were there for Kudu until the largest of the antelope family in the world walked out, the ELAND. I had seen 4 bulls on Monday morning and thought how huge and elegant they looked. Not on our package of ten animals, I also new the ala carte price of him. He walked out of the spring area alone, grazing as he went. I asked Denver how he stacked up, and after glassing, he said it checked all the boxes--big horns, mature face and body and already turning the blue gray color the mature bulls wear. I asked him the range, 400 yards. Ouch! Did I mention the wind was screaming mostly to us at 30+ mph? Knowing that I would regret passing on this shot for the rest of my life, I decided it was worth it, not looking at Ruth for her blessing, and made the command decision to do it. We decided with the wind and the enormous size of the ELAND (1900 lbs,) and their athletic ability, often being able to clear an 8’ high fence, that it would take the perfect shot placement to get it done. We edged down the very steep hillside and closed that distance to 350 yds, with the Bog Pod set in it’s lowest position for sitting. It made me less vulnerable to the wind against my upper body, a lesson learned from Day 1. Also, with my phone in hand, we calculated a firing solution for drift, even with the great ballistics of the Hornady round.

Only problem now was lack of cooperation on the part of Mr. ELAND. He wasn’t aware of us, but Denver made it clear that hitting him in his massive shoulder structure would not be good as the bullet likely would not penetrate to the vitals. So entry needed to be quartering away, entry in the rib cage then through the vitals. We just needed Mr. ELAND to oblige our need. After about 15 minutes, he did just that. Did I mention the wind? My hat and glasses flew off behind me. I was hunched as low as I could get on the steep hillside. You know what’s coming next, THWACK!!!!! He bronco kicked and ran about 10 yds. I immediately reloaded and announced I was ready for a follow up. Denver on the glass said no need, and the gentle giant staggered and fell there. Wow, feeling as though every shot added to the MUTT'S growing legend and feeling it was a defining shot for me. This was the summit. Surely it could not get better. Wrong again, Marty. Another of Denver's sayings “Let’s see what the bush has to offer today”. I announced I was done and that all remaining shots would go to Eric and/or Ruth. 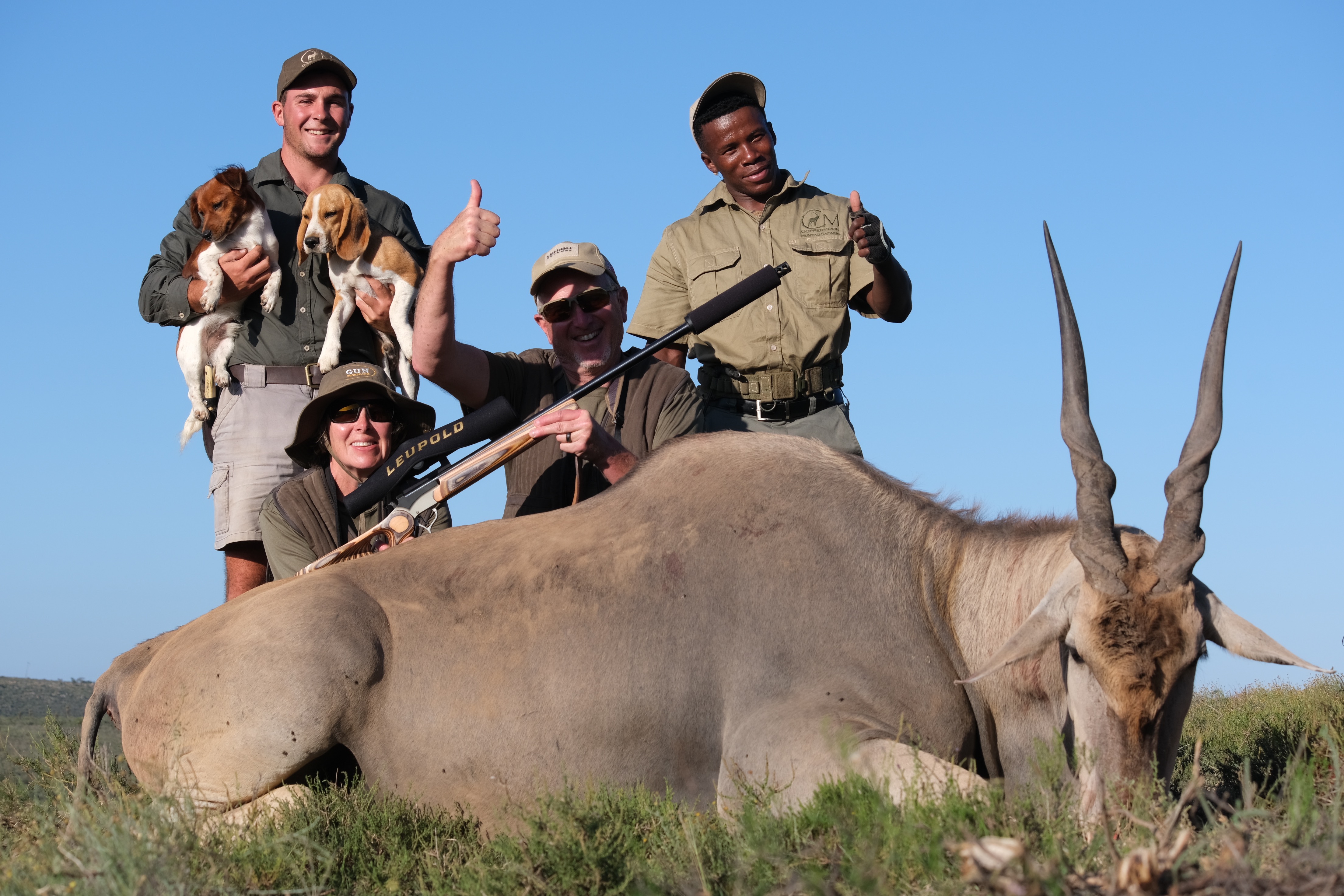