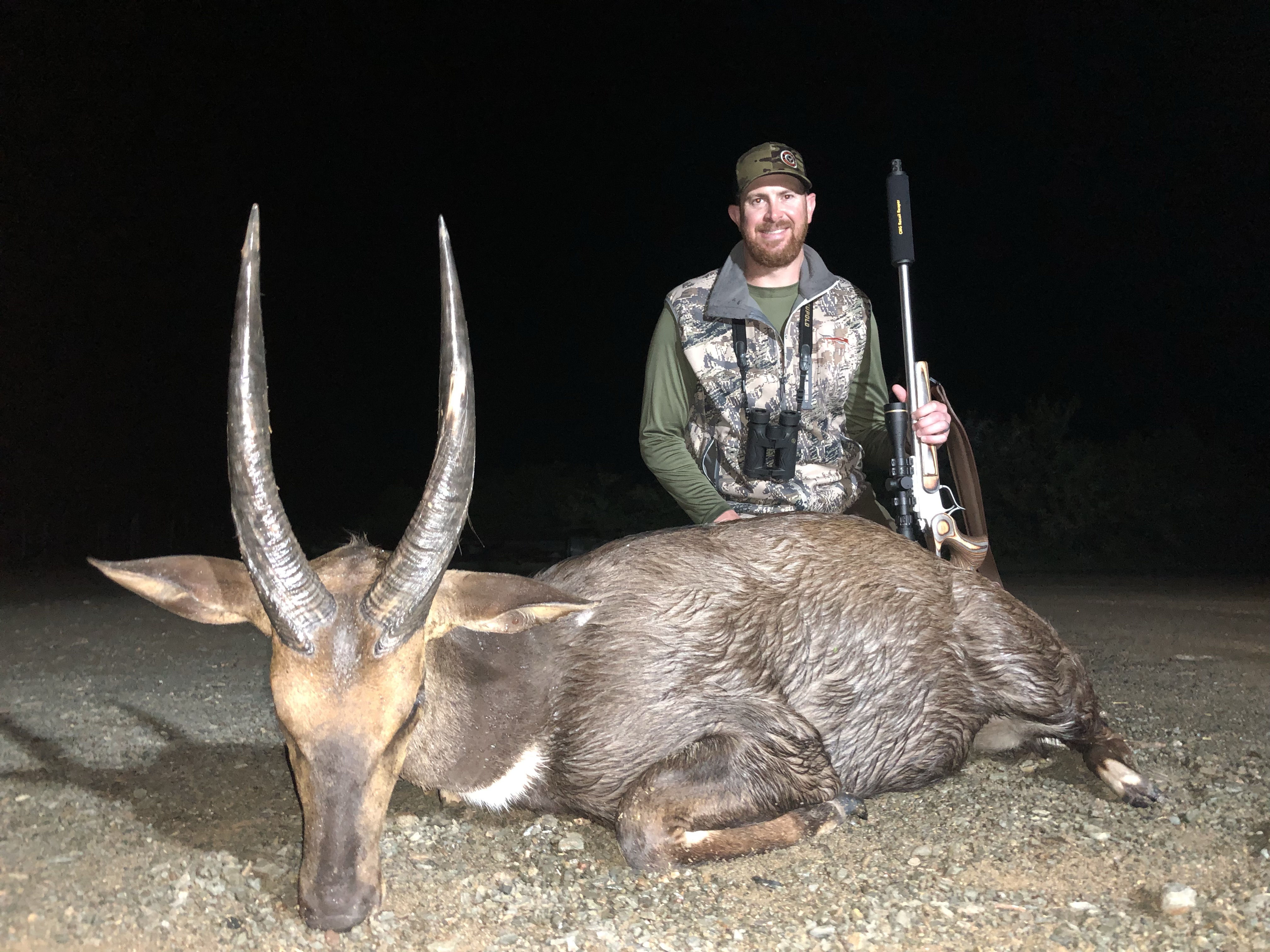 A 5 am departure for the alfalfa field of Saturday evening with the goal to be there at first light for that same Bushbuck ram. We did at least see one along with a few nice warthogs with the latter deserving a stalk. No dice as we are sure they indeed hunkered down until we were gone.

We headed back for another great breakfast. With 3 animals still on the list and time getting short, we turned it right around and headed for the StillFountein valley. As we descended the very steep entrance to the valley, Denver and the tracker team spied a group of 4 Nyala bulls feeding in a meadow of the valley floor. At this point, I hadn’t yet admitted that the Nyala might have been a close second to the Kudu in terms of my desire for a pistol trophy score.

Just a few feet ahead a few warthogs showed themselves in that same meadow, so a quick dismount caused me to gulp at looking up the ridgeline that we now started to climb. If we were successful in getting up there in good time, it would give us good cover on the high ground overlooking that meadow. We actually passed that group of Nyala bulls along the climb to which a shift in my priorities could have netted an excellent bull with only about a 150 yds pistol shot to overcome, BUT I was stubborn and we continued our pursuit of the warthogs. By the time our generation (Ruth and I) reached the summit, Eric, carrying the 375JDJ and Denver were ready to continue to skirt the back crest to get in a better shot position. Thankfully, we were instructed to stay put so there was no argument from me. Since the video crew left on Sunday, it gave us the opportunity to video with our phone zooming to the max to try to get the drama about to unfold on the meadow floor below from about 250 yards. THWACK! meant a good hit with a quick follow shot from 200 yds to close the deal before we started down. The length of the tusks are the determining factor for trophy quality on a Warthog as the desired look is for those tusks to curl back up seemingly seeking to poke itself in the eye or creating a massive looking grin. From afar all looked good causing us to assume a boar because, although sows have tusks, too, they are hardly ever as big as the bore. You guessed it, a huge sow, but in the tusk world, it’s size that matters not gender. Another box checked and another in the salt.

A return trip to the skinning shed and lunch gave us time to plan for the evening. Two failed attempts at the Bushbuck caused Denver to call an audible and get permission to hunt another alfalfa field, this one filled with sheep (not on the list). As we sat in the truck glassing those very noisy fuzzy friends, it began to rain and guess who left without their rain coat? No, not Eric or Ruth, but me. I mean we did say “whatever it takes" right? A long, winding stalk of drainage ditches and edge of the field bush got us to about 250 yards from where 3 ewes and a ram had been spotted from the truck. Luckily, just a drizzle so I mean how bad could this be right? The Bog Pod ready, the 375JDJ rifle mounted, the frame and optics covered from the now intensifying rain, we very quietly waited. Ruth and I found a log in the drainage ditch to sit and monitor under cover of trees the progress or lack thereof, watching the trackers glass while Eric and Denver watch that end of the field. It took about 2 hours for the rain to saturate the foliage therefore raining at least as much under our protective cover as out in the open. We whispered back and forth, sometimes quietly chuckling with each other about this scene. Wait a minute, who is the woman sitting next to me, what has she become? Some kind of super hunting transformer robot woman on a mission? Did I mention it really was pouring buckets now and getting darker by the minute? But wait, the lead tracker has seen a shadow. The very dark coat of the Bushbuck ram literally bouncing in and out of cover. Come on man, get serious. Don’t you realize you are in mortal danger? Denver struggled but finally was able to see the mass of his dark horns against the dark background enough to green light Eric. Yes, that sound again as he made the perfect quartering away shot at 230 yards dropping Mr. Bushbuck in place. Now dark, we just had to go find him. I came up with a Leupold slogan on the trip “WHEN CLOSE ISN’T GOOD ENOUGH,” and in this case, I’m sure lesser optics without the light gathering ability would not have gotten it done. Another in the salt.

Wetter than the others but in the salt nonetheless. Did I mention wet? It’s a good thing the temperatures were still warm. Gosh, since our laundry is done remote, I wonder how we will get our only outer layer ready and dry by morning? Oh well, whatever it takes. Funniest quote of the night between Eric and Denver, Eric says “no guts no glory” and Denver says “No rain no story!" Those two are dangerous together.